Cohosted by the DAF Philosophy Discussion Group and Interfaith Circle 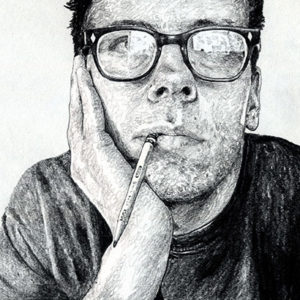 Rev. Bruce Wright joined DAF in December 2020 and died January 30 this year. He and his wife Barbara are unsung heroes of contemporary activism and faithful ministry to the most impoverished and oppressed among us since the 1980s.

FISH began cartooning over 20 years ago. His images challenge us to unleash our emotional strength in empathy, with brilliantly iconoclastic precision rarely or never found elsewhere. His art taps into the darkest shadows and most blinding lights of our senses and sense-making of self and other, exposing the truths and realities defining us as our everyday lives collapse around us. Mere facts disintegrate in the raw aesthetic of his creativity. His work has been featured in The Atlantic, The Nation, Los Angeles Times, TruthDig, Vanity Fair, and most recently, ScheerPost. He’s won numerous accolades, including several AAN Alt Weekly Awards, the Grambs Aronson Award for Cartooning with a Conscience, and the Sigma Delta Chi Award for Editorial Cartooning from the Society of Professional Journalists. He also teaches at both the University of Pennsylvania and Barnard College. As an event preview, for an intriguing introduction and stark insight into FISH’s creative genius, please enjoy his 22-minute 2017 TEDxPenn talk [Warning! Graphic content!]

This session is dedicated to the memory of all victims of racist oppression and to all who are now suffering or ever have suffered the brutality of White Supremacist Manifest Destiny. The session is also held  in honor of Bruce Wright, a friend and brother of like mind and kindred spirit in activist ministry on behalf of any and all thus victimized by the evil powers and forces besetting humanity throughout our history to the present existential and spiritual predicament we’re in.

A few hours or the day before the event starts, the Zoom link to the event will be e-mailed to all who indicate “Going” or “Interested” here on the DAF Ning platform, and it will be posted on the event in the Facebook private group. The session will be recorded for subsequent online access. Contact Terry with any questions or concerns or for additional information.

You need to be a member of Deep Adaptation Forum to add comments!

This reply was deleted.